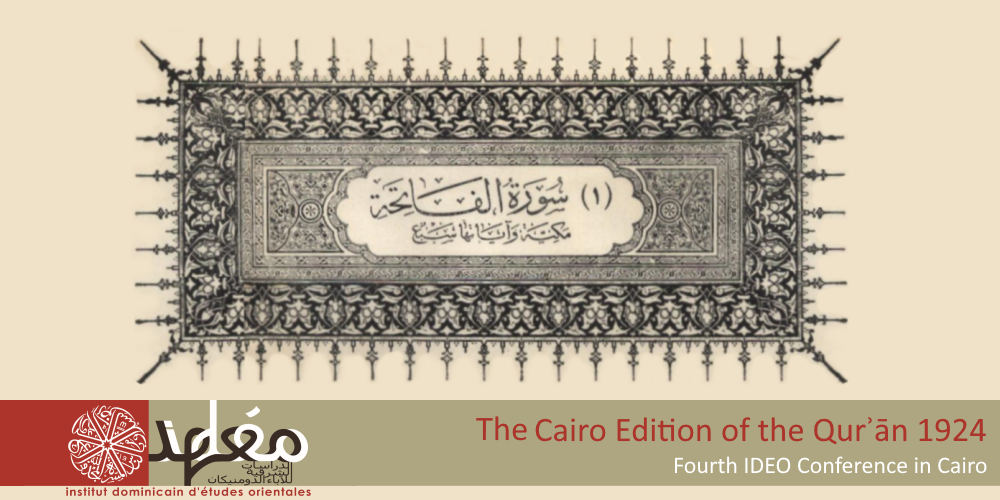 Under the auspices of the Dominican Institute for Oriental Studies, and as part of the Adawāt project, an international conference was held at the American University in Cairo on “The Cairo Edition of the Qurʾān 1924”, more accurately referred to as “King Fuʾād’s Qurʾān” in order to distinguish it from “King Fahd’s Qurʾān”, which is also known as the “Medina Qurʾān” (1985). Under the scientific supervision of Asma Hilali (University of Lille) and a scientific board including Omar Alí-de-Unzaga (IIS London), Aziz Hilal (IDEO), Davidson McLaren (Thesaurus Islamicus, Istanbul) and Ahmad Wagih (IDEO), the conference aimed to make a first scientific historical and contextual evaluation and study of the 1924 Cairo Edition of the Qurʾān, which until then had never benefited from such an event.

A first inventory of the maṣāḥif

Mohammed Hassan, researcher at the Center for Calligraphy and Scriptures Studies at the Library of Alexandria, presented an inventory of the maṣāḥif (singular muṣḥaf) that existed before 1924. Most of these maṣāḥif remain fragmented and neither their calligraphers nor their copyists are known. Of all these maṣāḥif, which mark the decline of the manuscript Qurʾān, that of Riḍwān ibn Muḥammad al-Muḫallalātī (1834‒1893) is the best written and the best designed. However, it does not escape the shortcomings of other printed maṣāḥif: poor quality of printing papers which guarantee good long-term preservation; various and several mistakes; absence of punctuation as well as markers essential for good quality reading (taǧwīd); markers involving a sāǧida (prostration); etc. It may be noted that despite the imperfections of these maṣāḥif, they contributed to the standardization of the printed muṣḥaf of which the King Fuʾād’s muṣḥaf will only be the continuation.

Ahmed Mansour, researcher at the same center, suggested to analyze a muṣḥaf published by the Būlāq Publishing House in 1881. This was an opportunity for the participants to browse the history of European and Western editions of the Qurʾān (Venice, Flügel, Kazan… etc.) and the first activities of the Būlāq Publishing House, founded by Mohammed Ali in 1820. The muṣḥaf analyzed by the lecturer seems to have benefited from all the previous maṣāḥif, but it adopts the orthographic writing (al-rasm al-imlāʾī) and not the Ottoman spelling (al-rasm al-ʿuṯmānī, relating to the Caliph Othman), while this was the case for all maṣāḥif from the 7ᵗʰ century onwards. We finally note that this muṣḥaf is incomplete and does not mention the names of the sūras.

Who are the audience of this edition in the Muslim world?

In his contribution, Ali Akbar, researcher at Bayt al Qurʾān in Jakarta (Indonesia), mentioned the place of King Fuʾād’s muṣḥaf among the maṣāḥif printed in Indonesia at the end of the 19ᵗʰ and 20ᵗʰ centuries. The researcher indicated that the oldest lithographic edition dates back to 1848 and originates in Palembang in south Sumatra. Other editions of the Qurʾān reached Indonesia after this date, including an Indian edition. Ali Akbar underlined that the Cairo muṣḥaf was indeed used in Indonesia and was brought by Indonesians who studied in Cairo. However, this use is very rare.

The second panel, moderated by Michael Marx (head of the Corpus Coranicum at the Berlin-Brandenburgische Akademie der Wissenschaften), took place on Sunday morning October 17ᵗʰ. The first contribution to this panel was made by Necmettin Gökkır, from Istanbul University, and focused on the reception and perception of the Cairo Qurʾān in post-Ottoman Turkey. Reception of the Egyptian Qurʾān was somewhat mixed, according to Gökkır, considering that the first edition of the Ottoman Qurʾān took place in 1874 and had already been widely distributed in the Ottoman-controlled world, including Egypt. Therefore, the Turkish religious authorities found it difficult to accept this new muṣḥaf, although they recognized in it their own style and their own method of editing the Qurʾān. But they saw Fuʾād’s endeavor only as an attempt to oppose the Turkish religious authority over the Muslim world.

Where does the success of the King Fuʾād edition come from in the Arab world?

Michael Marx shed light on the historical context of the King Fuʾād’s edition. He showed that, since 1950, this Qurʾān had became the essential reference for European researchers and academics, before it was relegated to a second place by King Fahd’s muṣḥaf. Such “national” maṣāḥif have been added to the two “standard” ones, either to serve educational or ritual aims, or to glorify states or religious institutions through impressive editions.

The contribution of Philipp Bruckmayar, from the University of Vienna, demonstrated that the 1924 Cairo edition had an impact on the whole of the Arabic-speaking Muslim sphere due to King Fahd’s muṣḥaf, also called the “Medina Qurʾān”, which was initiated by Saudi King Fahd Ben Abdelaziz in 1985. Contrary to the popular belief, even if the Cairo edition had little echo in the Muslim Arab World, it actually spread throughout this world through this Medina edition, which is a plagiarism of the 1924 Cairo edition, except for two letters. This Medina muṣḥaf is part of a larger project: to assert the central position of Saudi Arabia within the Islamic world by translating the Qurʾān into about eighty languages and by spreading the impact of the Islamic University of Medina (IUM) at the detriment of al-Azhar.

In a second contribution, Mohammed Hassan discussed the issue of the lawāḥiq (the annexes) to the various printed maṣāḥif and the role of King Fuʾād’s muṣḥaf in standardizing these lawāḥiq. The first one who gave a substantial annex to his muṣḥaf was Riḍwān al-Muḫallalātī. His annex, which focused on “the completion of the reading of the Qurʾān” (ḫatm al-Qurʾān), specified the place and the date of the edition, the name of the copyist, the chosen orthography (al-ram al-ʿutmānī in this case), and the number of verses for each sūra, etc. this tradition will be confirmed and enriched by King Fuʾād’s muṣḥaf, that adds details about the abrogating and the abrogated (al-nāsiḫ wa-l-mansūḫ),  the way in which the Qurʾān was revealed, the seven readings (al-qirāʾāt al-sabʿ). At the end of this very interesting contribution, a question remains without answer: where do these lawāḥiq derive their legitimacy from?

In his contribution, Aziz Hilal asked the crucial question: why wait till 1924 to print the official edition of the Qurʾān from al-Azhar? Printing began in Egypt in 1823. This product of European origin raised only suspicion of the Muslim clerics, who initially refused that the “Word of God” be soiled by the typographic technique. Mohammed Ali, who did not want another confrontation with al-Azhar, did nothing against the Ottoman fatwa-s forbidding any printing of the Qurʾān. As for King Fuʾād’s Qurʾān, its importance should not hide al-Azhar’s desire to make this king “a caliph in place of the caliph”. The abolition of the caliphate left a gape that the religious authorities could not bear. It is in this context that a strong and symbolic action had to be taken by Muslims: editing the Qurʾān under the auspices of a scientific committee and printing it was the first step in making Cairo the new capital of the caliphate and al-Azhar the undisputed godfather of this edition. Aziz Hilal also mentioned that the date given in the colophon of this edition is 1919. The choice of the date of 1924 retained by the tradition symbolically represents the date of the abolition of the caliphate.

Which edition? The question of rasm

In the last panel of the conference, the contribution of Omar Hamdan, from the University of Tübingen, focused on the reasons for choosing al-rasm al-ʿuṯmānī as the orthography of the Qurʾān. He started from a quote by al-Bāqillānī (d. 403/1013) who states in his Iʿǧāz al-qurʾān that “the book was written in the shortest manner (ʿalā al-tarīq al-aḫṣar)”, and it is the rasm al-ʿuṯmānī that makes this short manner possible. Indeed, this rasm prefers deletion (ḥaḏf) whenever necessary. Thus, for example:

We could cite many other examples to show that for the Qurʾān, priority is given, not to reading (al-qirāʾa), but to recitation (al-tilāwa). For Muslims, in order for the Qurʾān to always live “in the hearts of people”, reading or writing should be always oriented and controlled by recitation and by memorization (­ḥifẓ).

Omar Hamdan has further shown that King Fuʾād’s muṣḥaf did not always follow the rules of this rasm al-ʿuṯmānī.

In the final talk, Asma Hilali suggested an agenda for future researches. In particular, she suggested to integrate the question of editions within an archaeology of knowledge.