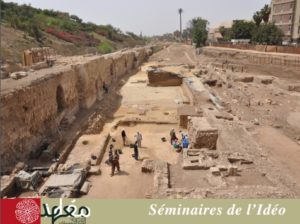 Stéphane Pradines has worked over fifteen years with an international team on the excavations of the walls of Cairo. These excavations uncovered four closely linked structures: a first Fatimid rammed-earth wall dating 969-971 built by Ǧawhar al-Ṣiqillī (d. 381/992); a second Fatimid wall built of mud-brick that supports this first wall; monumental stone gates built by Badr al-Ǧamālī (d. 486/1094) between 1087 and 1092; and finally the Ayyubid stone wall built in 1173‒1177 by Ṣalāḥ al-Din (d. 589/1193) encircling these other structures and separated from them by a few meters.

Rammed-earth is a technique for building walls which is not found elsewhere in Egypt. This technique was probably brought by the North African workers who came with the first Fatimid rulers. Furthermore, the second Fatimid wall made of mud-brick was built at the same time as the stone gates, the two techniques having been used simultaneously.Fatimid and Ayyubid Cairo map is thus completely redesigned on its eastern part, and enlarged if compared to our pre-conceptions.