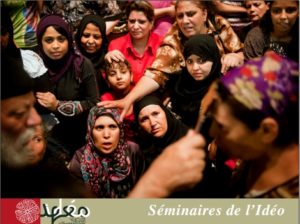 Gaétan Du Roy presented his doctoral research on Fr. Samʿān, an Egyptian Coptic Orthodox priest born in 1941, who gained celebrity by building a huge church complex in the neighborhood of Muqaṭṭam in Cairo, home of 30,000 ragpickers since the 70’s.

In the same vein as charismatic Protestant movements, and in particular the Presbyterian group Ḫalāṣ al-Nufūs, Fr. Samʿān was soon to make his style known as a Church builder, a preacher who insists a lot on a personal relationship to Christ rather than on the traditional Coptic personal devotions, a widely publicized exorcist and an organizer of ceremonies where music plays a great role.

Fr. Samʿān was able to builld up his authority by playing with different factors, although he was contested in some particular Coptic milieus, first and foremost his strong personal relationship with the clan leaders in the ragpicker community. He was also able to take advantage of the clericalization of the Coptic Orthodox community encouraged during the pontificate of Pope Chenouda III (1971‒2012) by surrounding himself by close collaborators: servants, deacons and priests.

The 2011 revolution and the death of Pope Chenouda in 2012 have ruined this fragile equilibrium that had enabled Fr. Samʿān to impose his style without breaking up with his hierarchy.