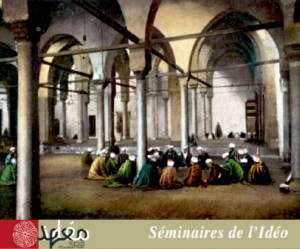 Simon Conrad presented his research on Muḥammad ʿAbduh’s thought, one of the key figures of Islamic modernism in the end of the 19th century.

The traditional vision on Muḥammad ʿAbduh’s thought inevitably highlights a tension that supposedly existed between Islam and modernity, analyzing his thought as a sort of compromise or reconciliation between them.

Far from being confined to the European culture, modernity is a trend that crossed all cultures, posing them the same questions: individual rights, the articulation between individuals and society, nation states, and the role of religion.

Egypt was exposed to the same questions at the end of the 19th century, and Muḥammad ʿAbduh answered them resorting to the classical Islamic tradition instead of importing non-Islamic or foreign ideas that may have destroyed the social and national fabric patiently elaborated.

He recycled elements of social and political philosophy of classical authors: al-Fārābī (d. 339/950), Miskawayh (d. 421/1030), al-Ġazālī (d. 505/1111), Ibn Ḫaldūn (d. 808/1406)… and in particular the idea of an organic link between the members of society who form a body whose head would be the State. Islamic values are at the service of the construction of this body, whose heart they irrigate.

Muḥammad ʿAbduh is thus a modern thinker in the full sense, just like many others in numerous non-European cultures at the same time. He called for a reform that should begin in the hearts, in order to revitalize the body of the entire nation, with the help of Islam.