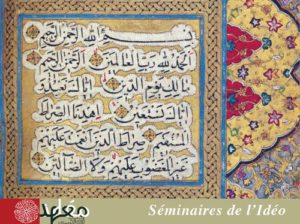 Prof. Abdullah Saeed presented us his last book, entitled Reading the Qur’an in the twenty-first century: a contextualist approach (Routledge, 2013).

Even in the Islamic conception of revelation, the Qurʾān is from the very beginning a text that dialogues with its auditors, answering their needs according to the circumstances. And if one of the first companions of the Prophet, ʿUmar b. al-Ḫaṭṭāb, felt authorised to bypass some written texts, by deciding for example that new converts would not receive any more a share of the collected alms, it is in virtue of a reinterpretation of the very reasons that had led the Prophet to do so, based on the Qurʾān (9, 60). ʿUmar was simply carrying on the living process of the contextualisation of the sacred text by reading it in a new context in order to extract its intention and its universal value, beyond its letter. The whole of the juridical tradition is built on the idea that in a new context, the very same juridical judgement can be less relevant, whereas it was in another context.

The Qurʾānic interpretation should thus take into consideration the direct context of a given verse within the text, the historical context of its revelation, the contemporary context in which we read this verse, the interpretative tradition that has read this verse and the inevitable subjectivity of the person interpreting, in the context of the community to which they belong.