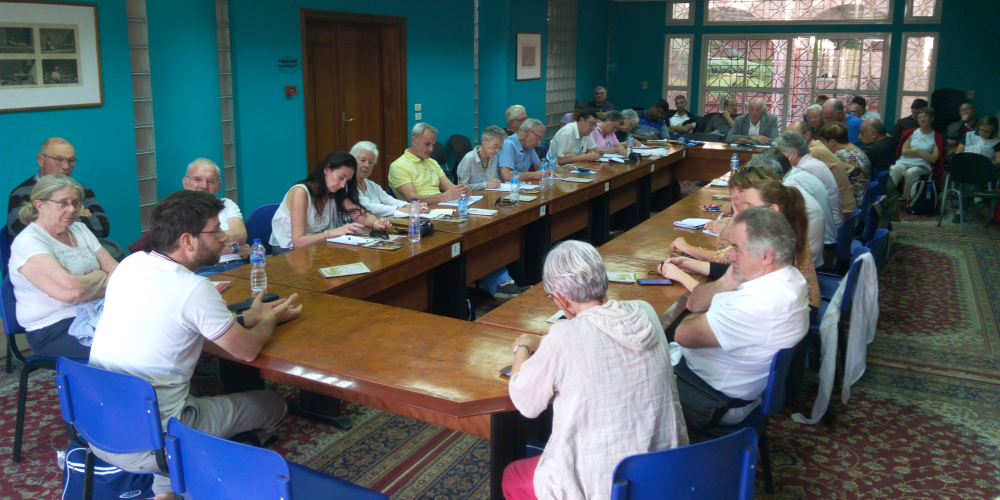 the eight hundredth anniversary of the meeting between Saint Francis and the Sultan al-Mālik al-Kāmil in 1219 in Damietta, Egypt, has been the occasion of many celebrations and pilgrimages. We had the opportunity to welcome a group of pilgrims at the Institute (photo). Whatever the historical truth of this event (which only Franciscan sources keep track of), the proselytizing intentions of Saint Francis and the Sultan’s supposed desire to convert to Christianity, it teaches us that disarmament is the prerequisite for any meeting, intellectual, cultural or symbolic disarmament. No authentic meeting can take place if the partners are not on an equal footing, in order to be able to move forward together, intellectually and culturally.

On November 13th, Ms. N. A. Mansour, PhD candidate at Princeton University, gave a seminar on “The History of Devotion to the Prophet Muḥammad through its Manuscripts”. These manuscripts are often of great interest to the researcher, when they contain prayers copied at the end of the text, marginal comments (usually grammatical) or prescriptive advice on how to use this or that prayer. Click here to read the report of the seminar…

On November 26th, Mr. Richard McGregor, from Vanderbilt University, led a seminar session on “Relics and the Religious Topography of Cairo”. Thanks to the precise study of the path and destiny of certain relics, it is possible to write a history of Muslim piety and political power games. Click here to read the report of the seminar…

On November 3rd, Mr. Dominique Avon gave a lecture entitled “The ‘Men of Religion’ in Contemporary Islam (1970‒2010)” as part of the “Midan Mounira” lectures co-organized by the French Institute of Egypt, the French Institute for Oriental Archaeology (IFAO), the Center for Economic, Legal and Social Studies and Documentation (Cedej) and the IDEO. While it is clear that external factors partly explain the crisis in the Muslim world (Israeli occupation, successive Gulf wars…), it is also necessary to take into consideration the depth of the internal divisions within the Islamic world. Click here to read the report…

On November 14th, the Friends of the IDEO, the Institute of Science and Theology of Religions (ISTR) and the newspaper La Croix organized an evening dedicated to women in Islam. After a round table led by Mrs. Anne-Bénédicte Hoffner and Emmanuel Pisani, OP in which Mrs. Kahina Bahloul, PhD candidate at EPHE on the question of the imamate according to Ibn ʿArabī, Mr. Jamel el Hamri, graduated in Islamic Sciences (EPHE) and PhD in History, and Mr. Hicham Abdel Gawad, PhD candidate in Religious Sciences in Louvain-la-Neuve, Mrs. Leïla Tauil, from the University of Geneva, gave a lecture on “The Status of Women in Contemporary Islamic discourse”. Click here to listen to the round table and the lecture (in French)…

On November 16th, Jean Druel, OP gave a lecture at the Institute for Research and Studies on the Mediterranean and the Middle East (iReMMO) on “al-Azhar, a Multi-Faceted Institution Facing the Challenges of Modernity”, as part of a study day devoted to religious institutions.

From November 21‒25th, Anne-Sylvie Boisliveau participated in the annual conference of the International Quranic Studies Association (IQSA), which was held this year in San Diego, USA. She gave a lecture entitled “ Boiling Drink, Denial of Resurrection, Hur in Paradise, and a Qurʾān within a Scripture: Intratextuality and the Structure of Surat al-Wāqiʿah (Q 56)”.

On November 12th, Jean Druel, OP participated in the radio program “L’esprit des capitales” on Fréquence Protestante, which was dedicated to the city of Cairo. Click here to listen to the program (in French)…

From November 19‒23rd, Emmanuel Pisani, OP led twelve students from the Institute of Science and Theology of Religions (ISTR) to Paris on a study trip to Rabat and participated in the conference “Human Mobility and Trajectories of Monotheisms in Africa” at the Ecumenical Institute of Theology al-Mowafaqa.

On November 4th, we welcomed a group of interns from the Netherlands-Flemish Institute in Cairo (NVIC).

On November 19th, we received for lunch Mr. Khassim Diakhaté, Professor of Islamic Studies at the University of Dakar, and Mr. Ousmane Diaw, Director of the Timbuktu publishing house.

On November 27th and 29th, we received a group of pilgrims of the Franciscan family who participated in the celebrations of the eighth centenary of the meeting between Saint Francis of Assisi and the Sultan al-Mālik al-Kāmil in Damietta in 1219 (photo).

In November we had the pleasure of receiving in the Scholars’ House Ms. N. A. Mansour, PhD candidate at Princeton University, Mr. Olivier Rampnoux, professor at the University of Poitiers, Mr. Ahmed Khalid Ayong, post-doctoral fellow in the Department of Islamic Studies at the University of Bayreuth in Germany, and Mr. Arnaud Ramière de Fortanier,  former president of the Association-Fondation du souvenir de Ferdinand de Lesseps et du canal de Suez (AFSLCS).