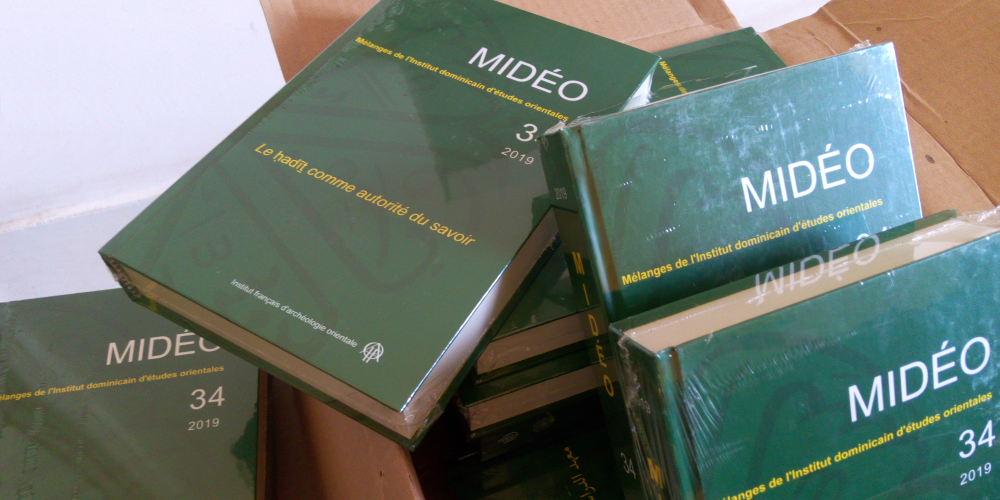 The issue 34 of MIDEO, the periodical of the IDEO, has just been published. Published and distributed by the IFAO (39 €), it is fully and freely available online on the OpenEdition website. This issue is devoted to the authority of Ḥadīṯ, a corpus of texts, very short or sometimes longer, attributed to the Prophet and transmitted by his companions. Thanks to the two large collections of ḥadīṯs collected by al-imām al-Buḫārī (d. 256/870) and al-imām Muslim (d. 261/875), both under the same title al-Ṣaḥīḥ, Muslim scholars have been able to use Ḥadīṯ as a source of authority in theological and legal debates. We are pleased to publish in this issue dedicated to Ḥadīṯ the contributions of Hocine Benkheira, Ruggero Vimercati Sanseverino, Adrien Candiard, Usman Ghani, Jacob Fareed Imam and Guillaume de Vaulx. You will find four other articles (Mateus Dominigues Da Silva, Almog Kasher, Wael Saleh and Guillaume de Vaulx) and two In memoriam (Maurice Borrmans and Cardinal Jean-Louis Tauran). The articles are either in French, English or Arabic, but each time a summary is available in all three languages. Enjoy your reading!

On June 3rd, Emmanuel Pisani, OP gave a lecture entitled “Islam: History and Contemporary Challenges” at the French Ministry of Justice, as part of a training session organized on the occasion of the opening of the Radicalization Care Center at the Paris-La Santé jail.

On June 14 and 15th, Amir Jajé, OP gave a lecture entitled “What is the role of religion in the establishment of peace?” at an international conference organized by the European Community of Religions ‒ In Dialogue.

On June 25th, Dennis Halft, OP gave a lecture on the document on Human Fraternity signed by Pope Francis and the great Imam of al-Azhar, Dr. Aḥmad al-Ṭayyib, in Abu Dhabi in February 2019. The lecture was held at the Faculty of Theology of the University of Trier in Germany.

On June 27 and 28th, Dennis Halft, OP gave a lecture on Muslim interpretations of the Gospels in a course taught at the Faculty of Catholic Theology at the University of Münster in Germany.

On June 28 and 29th, Amir Jajé, OP gave a lecture entitled “Sectarian Polarization and Related Tensions in Iraqi Society” at the workshop “Communities, Clashes and Cohabitations: Groups Perceptions from North Africa to Central Asia” organized by the Ludwig-Maximilian University in Munich, Germany.

From June 18 to 21st, René-Vincent du Grandlaunay, OP participated in the annual meeting of the MELCom International (Middle East Libraries Committee) in Naples. He gave a lecture on “The AlKindi Catalogue and the Description of Manuscripts in RDA”.

On June 27th, Emmanuel Pisani, OP participated in the Council for Interreligious Relations and New Religious Movements of the French Bishops’ Conference.

On June 11th, Emmanuel Pisani, OP participated as member of the jury of the thesis defense of Lamri Boulassel, entitled “History of the compilation of the Qurʾān and its readings from current sources and theories”, under the supervision of Geneviève Gobillot, at Lyon-III University.

From June 12 to 14th, Emmanuel Pisani, OP led the follow-up session “Muḥammad, Prophet of Islam”, which was held at the ISTR (Institute of Science and Theology of Religions) in Paris.

On June 24th, we welcomed a delegation from the Catholic University of Eichstätt-Ingolstadt as part of their program to digitize Egyptian Copto-Arabic manuscripts.

On June 25th, we welcomed Father Guillaume Bruté de Rémur, rector of the Redemptoris Mater Seminar (Beirut), he was accompanied by Mr. Carlo Giorgi, in charge of communication, as part of a study trip organized by the Africa World Institute on interreligious dialogue initiatives in Tunisia, Morocco and Egypt. We had invited Mr. Osama Nabil (University of al-Azhar) to come and meet them.