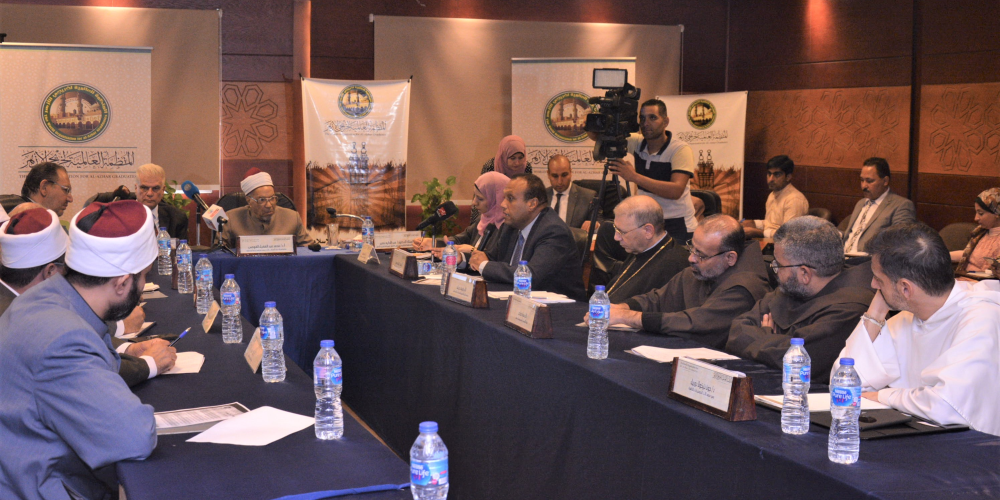 It is very striking to note that for several years Muslims have been taking the initiative in interreligious dialogue. The abuse Daesh has been inflicting has probably forced them to come out of the woods. As always, the media forms of this dialogue tend to overshadow academic research and joint charity work, which is also increasingly being initiated by Muslims. We are witnesses to all this at the IDEO and we are delighted about it. Due to your help, we hope to be able to respond positively to these increasing demands.

On October 30th, Mr. Adrien de Jarmy, PhD candidate at Sorbonne Université and beneficiary of the IFAO-IDEO doctoral fellowship for the year 2019‒2020, gave a seminar on the topic of “Analyzing the Emergence of Muḥammad’s Authority in the Maġāzī Literature”. In the Kitāb al-maġāzī found in the Muṣannaf of ʿAbd al-Razzāq al-Ṣanʿānī (d. 211/826) which includes 96% of the stories transmitted by Maʿmar b. Rāšid (m. 153/770), the Prophet is depicted above all as a warrior and does not occupy such a central place as he does in the Sīra of Ibn Hišām (m. 213/828), where he is omnipresent both as legislator and as a miracle worker. Click here to read the report of the seminar…

On October 21st and 22nd, Guillaume de Vaulx participated in the conference “Philosophy, Sciences and Theology in the Islamicate World of the 9th Century”, which took place at the French Institute of the Near East (IFPO) in Jordan. He gave a lecture entitled “The Question of Taskhīr – Between Philosophy, Zoology and Theology”.

On October 1st, Emmanuel Pisani, OP, along with Pierre Diarra, led a study day entitled “Missionary Dynamism of the Church” at the Institute of Science and Theology of Religions (ISTR) in Paris, in partnership with the Pontifical Missionary Works (OPM).

On October 23rd, Emmanuel Pisani, OP participated in the round table “Presentations of the Emblematic Figure of Mary”, organized by the National Institute of Oriental Languages and Civilizations (INALCO). He gave a lecture on the topic of: “Mary: A Woman on the Move in the Gospels”.

On October 25th, Emmanuel Pisani, OP led a session of the conference “Francis and the Sultan: The Fruitfulness of a Meeting?” which brought together John Tolan, Camille Rouxpetel, Bernard Heyberger and Bartolomeo Pirone.

On October 22nd, Jean Druel, OP was invited to participate in the workshop “Nations Without Terrorism: Towards Common Action”, organized by the World Association of Former Students of al-Azhar, which brought together twelve Christian and Muslim religious leaders (photo).

From October 6‒12th, René-Vincent du Grandlaunay, OP was in Erbil, Iraq, to prepare a project of cataloguing manuscripts and ancient books in AlKindi from the Digital Centre for Oriental Manuscripts, in partnership with the National Library of France. Srećko Koralija, OP from the Province of Croatia, is set to succeed Najeeb Michaeel, OP who founded this Center.

On October 21st, we welcomed Miss Esther Ravier, student at INALCO in training at IFAO, as part of a project to cataloguing IFAO’s manuscripts in AlKindi.

On October 27th, Jean Druel, OP was interviewed in the program “Le Jour du Seigneur” on the topic of Islamic-Christian dialogue. Click here to review the program in French…

On October 4th, we welcomed for lunch Ms. Ida Nitter, PhD student in Islamic Studies at the University of Pennsylvania, and Ms. Nadirah Mansour, PhD student at Princeton University.

On October 8th, we welcomed for lunch Mr. Wouter Poels, political adviser to the Belgian Embassy, and Laurenz Moens, trainee.

On October 22nd, we welcomed Mr. Richard McGregor, Professor of Islamic Studies at Vanderbilt University in Nashville, TN (USA), and visiting professor at the American University in Cairo (AUC).

In October we had the pleasure of receiving in the Scholars’ House Mr. Kyle Wynter-Stoner, PhD student at the University of Chicago, Ms. Gyöngyi Oroszi PhD student at the Avicenna Institute in Piliscsaba, Hungary, Mr. Bertrand de Margerie and M. Jean-Michel Coulot from Œuvre d’Orient.