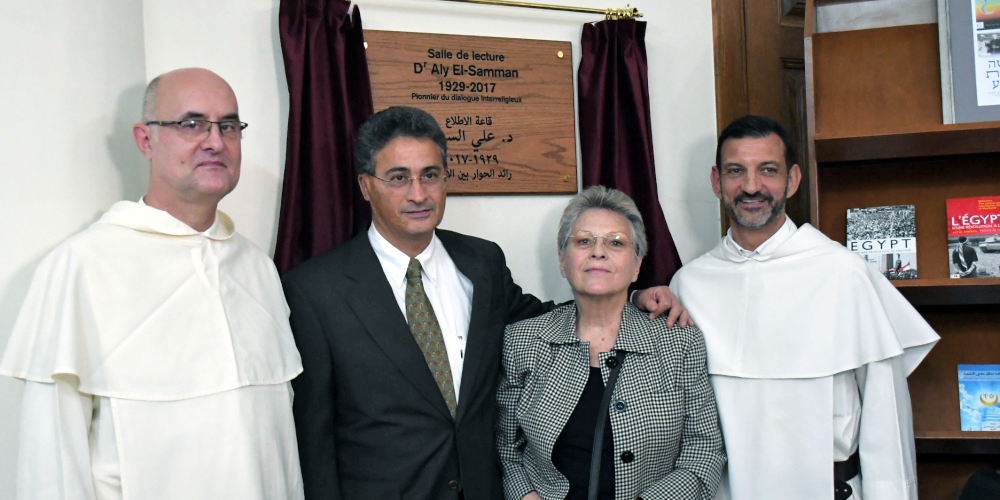 On December 18th, we had the pleasure and the honor of paying tribute to Dr. Aly Elsamman (1929‒2017), who played a decisive role in obtaining the construction permission for our new library inaugurated in 2002. Aly Elsamman was a pioneer of interreligious dialogue at a time when few people thought it was possible to talk serenely between Jews, Christians and Muslims. Aly Elsamman cannot be easily labelled. He worked as a journalist, a news agency director, an adviser to President Sadat, a ministerial council director, vice-president of al-Azhar’s standing committee for interreligious dialogue. The Dominican Institute is proud that the reading room of its library now bears his name. The ceremony took place in the presence of his wife Brigitte and his son Sam (photo).

We wish you a beautiful New Year 2020, full of stimulating study and nice encounters.

On December 6th, Emmanuel Pisani, OP gave a lecture entitled “From the Abu Dhabi document on human fraternity to the Mecca Charter: what status for the other?” at the research laboratory “Islam and Otherness” of the Institute of Science and Theology of Religions (ISTR).

On December 11th and 12th, Guillaume de Vaulx participated in the philosophy seminar of the French Institute of the Near East (IFPO) in Beirut entitled “Create—Destroy—Disappear”, during which he gave two lectures, the first one with Hélène Mutter, Sandrine Pelletier and Nibras Chehayed entitled “Art and Destruction”, and the second one with Nibras Chehayed entitled “Innovation, Revolution: What kind of Destruction?”.

On December 14th, Jean Jacques Pérennès, OP gave a lecture entitled “Pierre Claverie and Christian de Chergé: Two Views on the Mystery of Islam” at the University of Fribourg in Switzerland.

On December 15th, Jean Druel, OP gave a lecture entitled “The handwritten tradition of Sībawayh’s Kitāb and the influence of the ancient commentaries”, as part of the third conference on Arabic language and linguistics held at the American University in Cairo from December 15th to 17th.

On December 16th, the IDEO co-organized with the IRD Romain Simenel’s lecture entitled “Chanting Memory: Qurʾānic writing as Psalmography”, devoted to the techniques of learning the Qurʾān by heart developed by children in southern Morocco.

On December 19th, Emmanuel Pisani, OP gave a lecture at the Catholic University of Lyon (UCLy) entitled “The Scientist and the Politician: Facing the Authority, the Conservative Audacity of Abu Hamid al-Ghazali, a Great Thinker of Islam”. This lecture was organized by the Center for Studies of Cultures and Religions (CECR) as part of its Islamic sciences research laboratory “Authority and Regulation in Islam”.

On December 18th, we welcomed Mrs. Agnès Macquin, librarian of the IFAO, and her team. Our joint project to digitize our oldest books as part of the Web Portal of the Libraries of the Orient, funded by the French National Library, is coming to an end. The IFAO wishes to continue this work, as part of the EGYNUM project funded by CollEx-Persée.

On December 3rd, Jean Druel, OP led a workshop on the transliteration of Arabic into the Latin alphabet for the students of the Department of Arab and Islamic Studies at the American University in Cairo. Several tools are available on the “Toolbox” page of our site.

On December 18th, we welcomed for lunch Mr. Guillaume de Vaulx, member of the IDEO and researcher at the IFPO in Beirut.

In December we had the pleasure of receiving in the Scholars’ House Mrs Dorothea Reule and Mr. Denis Nosnitsin, researchers at the Hiob Ludolf Centre for Ethiopian Studies at the University of Hamburg; Mrs. Rebecca Skreslet, research associate at the Margaret Beaufort Institute of Theology; Mrs. Roula Khoury, director of the Center for the Study of the Modern Arab World in Beirut; and Mr. Michel Petit de la Perrelle from the Œuvre d’Orient.