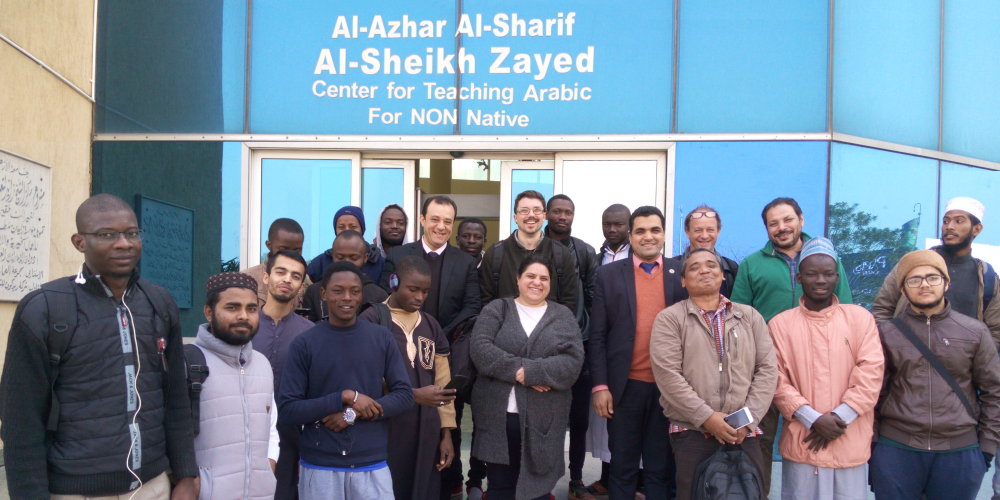 we had the opportunity with the participants of the intensive Arabic course (see below), to visit Al-Sheikh Zayed Center for Teaching Arabic for non-natives (photo). Located on the campus of al-Azhar University, this center that was founded in 2011 welcomes 3,000 foreign students to prepare them to study in one of al-Azhar’s faculties. During the visit, we discussed the possibility of working together to help students in Islamic studies to improve their level of Arabic language. Please spread the word!

From December 29ᵗʰ to January 5ᵗʰ, Claudio Monge, OP and Luca Refatti, OP of the Dominican Institute Dost-İ organized in İstanbul a Winter School entitled “A God on Man’s Trail” dedicated to the Christological quarrels of the 4ᵗʰ and 5ᵗʰ centuries. This seminar is part of a series to prepare for the 1,700ᵗʰ anniversary of the Council of Nicaea in the year 325. It is also an opportunity to reflect on the different understanding of who Christ is before the advent of Islam. Jean Druel, OP and Emmanuel Pisani, OP took part in this seminar.

From January 19ᵗʰ‒31ˢᵗ, the IDEO organized, in collaboration with Sibawayh Center, a two-week intensive Arabic course. In the morning, the six participants read excerpts from Qurʾānic commentaries, the life of the Prophet, ḥadīths, fiqh and Sufism. And in the afternoon, university professors gave them lectures on the same topics.

On January 23rd, Jean Jacques Pérennès, OP director of the French Biblical and Archaeological School in Jerusalem, and the entire community of the priory of Saint-Étienne had the privilege of welcoming the French president Emmanuel Macron. The conversation focused largely on the contribution of congregations and their research centers to the building of a better coexistence in the Middle East. The president concluded his visit by saying that “One is never truly free without the experience and imbalance of alterity. And it is in this strain that it is built”. Click here to read the report of the visit…

On January 22nd, Mr. Hadrien Collet gave a seminar on “Searching for the Takārīr in medieval Egypt: A quest to bridge over fragmentary evidence”. Historically, the kingdom of Takrūr is one of the first regions in West Africa have adopted Islam, in the middle of the 5ᵗʰ/11ᵗʰ century. They are mentioned in Arabic sources from the 7ᵗʰ/13ᵗʰ century: passing pilgrims, students and scholars, saints buried and venerated in Cairo. Click here to read the report…

On January 20ᵗʰ, Dennis Halft, OP gave a lecture entitled “The transformative effects of the Bible across religions: Shiite Muslim readings of Jewish and Christian scriptures, 1600‒1900”, at the Martin Buber Society of Fellows in the Humanities and Social Sciences, Hebrew University of Jerusalem.

On January 22nd, Dennis Halft, OP gave a lecture entitled “A treasure trove of Arabic manuscripts and documents in Najaf: The collection of the General Kāshif al-Ghiṭāʾ Foundation” at the Department of Arabic Language and Literature, Hebrew University of Jerusalem.

From January 21‒23ʳᵈ, father Jean-Louis Declais gave a 15-hour class to about forty people (seminarians and other participants) for an introduction to Islam, at the Saint-Yves Seminary in Rennes.

On January 24ᵗʰ, Emmanuel Pisani, OP participated in the GECI (Group of Catholic Teachers in Islamic Studies) which met in Marseille. He gave two lectures, the first one entitled “Why proselytism is the bane of Pope Francis?”, and the second one entitled “Arguments and overview of Christian movements in France for the evangelization of Muslims”.

On January 25ᵗʰ and 26ᵗʰ, Emmanuel Pisani, OP gave a lecture entitled “ Books of love, or the ocean of charity in Islam” during the conference of the French School of Yoga (EFY) entitled “Empathy, care, compassion”.

On January 27ᵗʰ, Emmanuel Pisani, OP gave a lecture entitled “The Islamic-Christian dialogue in Morocco in the 20ᵗʰ century” as part of an evening organized by the Institute of Science and Theology of Religions (ISTR) devoted to Islam in Morocco, in partnership with the Thomas More Institute.

On January 31ˢᵗ, Amir Jajé, OP gave a lecture on his book Le chiisme, clés historiques et théologiques, during an event organized by the association “The Friends of the IDEO” at the Dominican priory of the Annunciation in Paris.