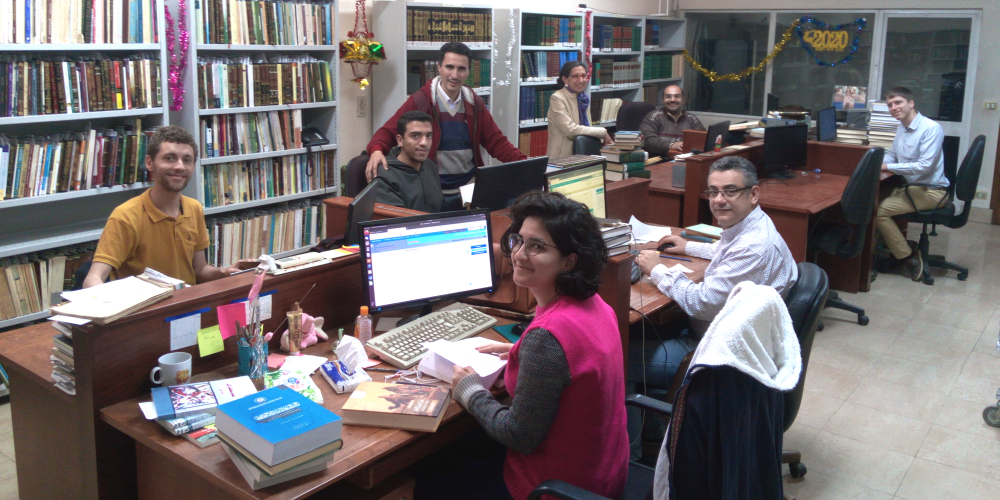 one of the books we acquired at the Book Fair this year deserves a special mention. It is an edition of Ansāb al-ašrāf of al-Balāḏurī (d. 279/892?), a biographical dictionary of the Prophet and the first Muslim generations. There are other editions of this book but this one symbolizes both the tragedy of the Middle East and the courage and determination of some researchers. Until the present day, only the second volume had been published, in 1996. But the publisher, Maḥmūd al-Firdaws al-ʿAẓm, continued his work in Syria and completed the publication of the twelve volumes in 2000. However, it is only today that these twelve volumes appeared, after spending twenty years in caves in Syria.

The IFAO and the IDEO are pleased to announce their joint offer of a one-year (pre-)doctoral fellowship in Cairo (September 2020‒August 2021) in the following fields: falsafa, kalām and naḥw. Click here for more information… (The deadline for applications: April 30th, 2020).

On February 11th, Mr. Adrien de Jarmy, PhD student at Sorbonne-Université and beneficiary of the IFAO-IDEO doctoral fellowship gave a seminar on Le Coran des historiens (Paris: Cerf, 2019). The point of view of Guillaume Dye, one of the two editors of the project with Mohammad-Ali Amir-Moezzi, is that the Qurʾān is a complicated, composite text, neither the work of a single man, nor a closed book, but an open collection that builds up gradually in discussion with the Late Antiquity context. Click here to read the report…

On February 23rd, the fourth session of the methodology seminar for the French-speaking PhD students at al-Azhar University was held as part of the Adawāt project. It was Emmanuel Pisani, OP who led the session. He focused on how to approach the works of an ancient author: how to verify their attribution, how to establish the chronology of the works of a given author, how to build the lexicon of an author.

On February 6th and 7th, Rémi Chéno, OP participated in the conference entitled “Are religious doctrines condemned to be opposed”, organized by the Institute of Science and Theology of Religions (ISTR) in Paris, under the supervision of Emmanuel Pisani, OP. Rémi Chéno gave a lecture intitled “ Conversation: overcoming the incommensurability of languages”, and Emmanuel Pisani gave a lecture entitled “Thinking of religious pluralism with Christian Duquoc”.

From February 11‒16th, Dennis Hlaft, OP participated in the 2020 Leadership Academy in Boston, United States. This fellowship program for German-speaking scholars and researchers is granted annually by the German Scholars Organization. This program promotes leadership and communication skills and supports fellows in developing their careers.

On February 13th, Dominique Avon gave a lecture intitled “ Lebanon: State and Communities, 1920‒2020” at the Sciences-Po Rennes Institute as part of the Travelling Festival.

On February 15th, Jean Druel, OP led a working day of the Seket Maaref group, whose program this year focuses on the methodology research in the social sciences and humanities. He presented the methodology of research on manuscripts of Arabic grammar.

On February 16th, Mrs. Anne-Bénédicte Hoffner, journalist at La Croix and member of the Bureau of the Friends of IDEO, gave a lecture on the topic of: “How to talk about Islam in a Catholic newspaper?”. Anne-Bénédicte Hoffner was for a long time in charge of the section on Islam and she had to develop her own course of action. Click here to read the report in English and to listen to the lecture in French…

On February 27th, Emmanuel Pisani, OP gave a lecture intitled “Suicide in Islam: al-Tawḥīdī and Miskawayh in view of the Islamic tradition”, as part of the University Diploma of Suicidology at the University of Paris-Descartes.

On February 27th, Dominique Avon participated in the seminar entitled “Egyptian and Copt ʿUlamāʾ (end of the 18th century‒beginning of 21st century”, organized in Paris by the Institute of Science and Theology of Religions (ISTR).

As every year, the Book Fair was a major event in the life of the IDEO. The excellent organization in the last year was confirmed this year and the publishers from the Arab world were present. We purchased more than 1,000 titles, 30% more than last year, for a total budget of 14,000 euros. Click here to view a list of the latest acquisitions as they are catalogued… (photo).

On February 18th, Adrien Candiard, OP led one of the two round tables of the conference “From freedom of worship to freedom of religion and belief”, organised by the Italian Embassy in Cairo.

From February 20‒22nd, Amir Jajé, OP participated in a workshop in Beirut on the topic of “The future of Christians in the Middle East: Towards a global ecclesial pact”.

On February 25th, Dominique Avon participated with Mathilde Philip-Gay, Daniel Moulinet and Jean-Marie Gueullette in a round table on the topic of “Freedom of conscience: history of a concept and a right”, at the Catholic University of Lyon.

On February 11th, two students from the American University, one from the Department of Arab and Islamic Civilizations (ARIC) and the other from the Center for Arabic Study Abroad (CASA), began their internship. This internship, which consists of a training course in referential cataloguing, validates a course in their program. The two interns will focus on the authors of Nahḍa.

On February 3rd, we had the pleasure to welcome Bishop Pascal Gollnisch, General Director of the French Catholic association Œuvre d’Orient.

On February 12th, we welcomed for dinner Mrs. Éléonore Cellard, researcher and specialist in the manuscripts of the Qurʾān and of the muṣḥaf of Sanaa in particular.

On February 13th, we welcomed Mrs. Catherine Morin Desailly, President of the French Egyptian Friendship Group in the Senate. She was accompanied by a delegation of senators.

On February 13th, we welcomed Mr. Djim Dramé, Director of the Islamic Studies Laboratory of the Fundamental Institute of Black Africa (IFAN) in Dakar, who came to study possible collaborations.

On February 14th, we welcomed a group of teachers from the French Highschool in Cairo who came to discover the IDEO.

On February 19th, we welcomed Mr. Ramón Gil-Casares, Ambassador of Spain to Egypt.

On February 25th, we welcomed for lunch Mr. Jannis Niehoff-Panagiotidis, Professor of Byzantine Studies at the Freie Universität in Berlin.

On February 28th, we welcomed Mr. Daniel Kinitz and Mr. Boris Liebrenz, researchers at the University of Leipzig, who are working on the Bibliotheca Arabica project and who came to study possible collaboration.

In February we had the pleasure of receiving in the Scholars’ House Mrs. Mónika Schönléber and Ms. Zsuzsanna Csorba, PhD students from the Avicenna Institute of Middle Eastern Studies in Piliscsaba, Hungary; and Mr. Jáchym Šenkyřík, PhD student at Charles University in Prague, Czech Republic.