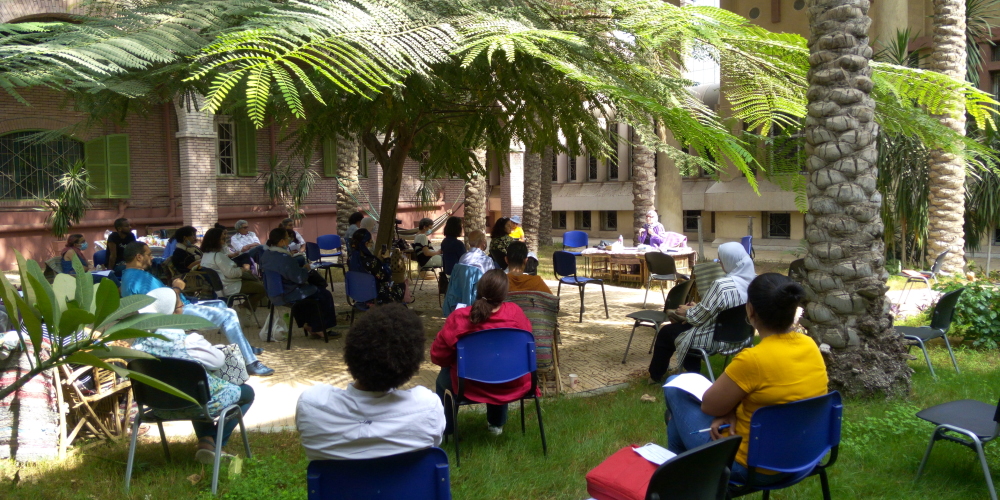 Current events and international tensions remind us that there is a difference between rights and friendship. Yes, we all have the right to be mocking, sarcastic, or even hateful, but no, this is not the desirable mode of our relationships with each other. There is no inalienable right to ridicule the sensibility of people and there is no intangible taboo that would make religions untouchable sacred objects. We must be able to continue to talk about all this in class, at university, with friends and family. Wish you all a great celebration of the Prophet’s Birth and a happy feast of All Saints’ Day!

From October 16ᵗʰ‒18ᵗʰ we held in Cairo (and on Zoom) the third IDEO Conference “From the back of the heart: Reciting in the Early Islamic Empire”, of which Devin Stewart was the keynote speaker. An interesting side of the topic of recitation is, among other things, that it forces us to reconsider the definition of what a text is. Click here to read the report of the conference…

On October 20ᵗʰ, Mr. Simon Conrad, PhD student in Islamic Studies at Princeton University, presented his current research on Abū al-ʿIlā ʿAfīfī (1897‒1966) who was the first to introduce Sufi studies at the Egyptian University. Click here to read the report…

Form October 1ˢᵗ‒3ʳᵈ, Michel Cuypers, PFJ participated in the Seventh International Conference of the International Society for the Study of Biblical and Semitic Rhetoric (Gregorian University, Rome). In his contribution he presented a rhetorical and inter-textual analysis of the eighth Sūra of the Qurʾān “The Spoils”.

On October 5ᵗʰ, Emmanuel Pisani, OP gave a lecture entitled “Christianity and Islam. From polemics to dialogue”, to the radicalized prisoners in the Santé Prison in Paris, at the invitation of the School for Higher Studies in Social Sciences (EHESS).

On October 22ⁿᵈ, Adrien Candiard, OP participated in the opening conference of the Louis Massignon Chair of Religious Studies at the Center for International Studies (Sciences Po-CERI), during which he made a contribution with Mr. Olivier Roy on the topic of “Faith versus identity? The religious dimension in cultural wars”.

On October 31ˢᵗ, we welcomed at the IDEO the group “Seket Maaref” (featured on the picture) for a lecture by Omaima Abubakr on women scholars in Islamic sciences in the first centuries of Islam. While tradition has transmitted to us the names of hundreds of women who have studied, taught and written in most Islamic sciences, no manuscript has come down to us. This is probably due to the fact that women did not teach in the official madrasah networks when this system became widespread.

On October 4ᵗʰ, Emmanuel Pisani, OP participated in the France 2 television program Les chemins de la foi on the topic of “Creation and ecology in Islam”.

On October 9ᵗʰ, Mr. Bechir Choucha, made a video clip on the IDEO and its library. Click here to watch the video on Facebook (in Arabic)…

On October 4ᵗʰ, we welcomed for lunch Mrs. Camille Thiébaut, from the political section of the French Embassy.

On October 28ᵗʰ, we welcomed for lunch Mr. François Cornet d’Elzius, Belgian Ambassador to Egypt, and his wife.

In October we had the pleasure of receiving in the Scholars’ House Mr. Simon Conrad, PhD student in Islamic Studies at the Princeton University.