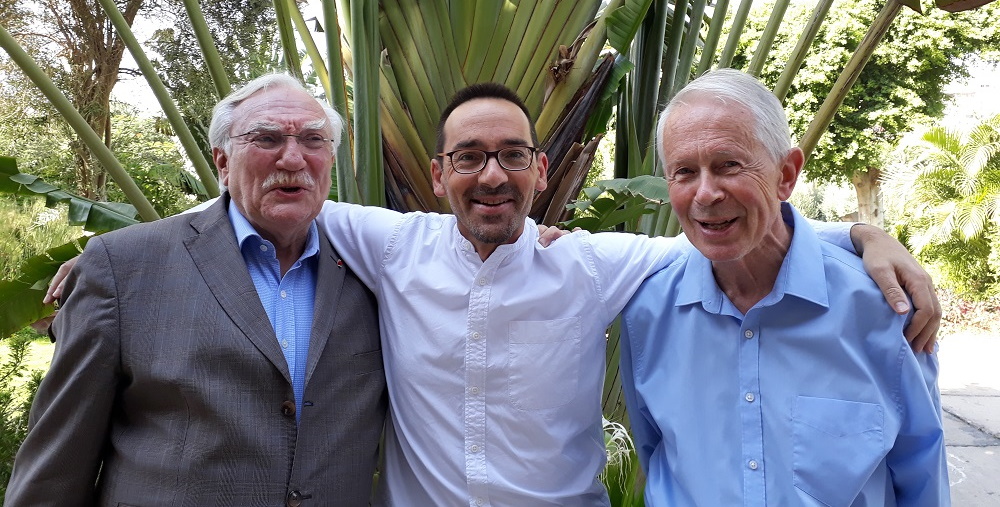 In September, we welcomed the President and the Secretary General of the association “The Friends of the IDEO”. Jean Félix-Paganon knows Cairo well. He was an ambassador here. Bertrand Wallon knows the library world well. He was Director of Human Resources at the French National Library. It is unnecessary to say that their presence and their encouragement were very precious to us. Their suggestions and advice stimulated us, and their questions often allowed us to see things differently, outside the box. How important are questions in discussions and reflection! It is said in Islamic tradition, which has a certain Talmudic echo, that one evening an old shaykh, in love with wisdom and science, was in tears. Why are you crying, o holy old man? Because today nobody asked me any questions*! Questions, thanks God, friends have asked us! In this regard, if you would like to get involved with us or support our activities in Cairo, you may become an member of the association “The Friends of the IDEO”. In addition, and it is always good to know, by joining, you can benefit from substantial tax deductions in France, in the United States. Thank you in advance.

On September 11ᵗʰ, Dennis Halft, OP gave a lecture in Berlin on an Orthodox Jewish perspective on Christianity and Islam after the Shoah from the writings of André Neher (1914-1988), as part of an international conference entitled “Glorification of differences” (Michel de Certeau SJ) which honored the birthday of Ulrich Engel, OP.

On September 3ʳᵈ, we welcomed a group of twenty people from the Center Sard, that works on archiving the Shubra district.

On September 5ᵗʰ, we welcomed Mrs. Siga Maguiraga, PhD student in History of Islamicate Worlds at the European University Institute in Florence (Italy).

On September 14ᵗʰ, we welcomed Mr. Nadir Boudjellal, PhD student at the INALCO in Paris, and who works on isolated letters in the Qurʾān.

On September 15ᵗʰ, we welcomed Mr. Mourad al-Riffi, the new director of the Institute of Arab Manuscripts, who arrived three weeks ago in Cairo.

On September 18ᵗʰ, we welcomed Mr. Oussama Nabil, Chargé de Mission at the Mashyakha and committed to al-Azhar Observatory for Combating Extremism, and Mr. Sami Mandour, professor at the Faculty of Languages and Translation at the University of al-Azhar.

On September 20ᵗʰ, we welcomed Mr. Said Azer, director of the Syro-Catholic library in Cairo and his assistant, Mr. Carlo Pietro Giorgi, along with Father Vincenzo Ianniello, director and librarian of the Franciscan Center for Oriental Christian Studies (Mousky).

From September 25ᵗʰ‒29ᵗʰ, we welcomed Mr. Jean Félix-Paganon and Mr. Bertrand Wallon from the association “The Friends of the IDEO”, along with Mr. François Druel, who is currently launching the association “LRM Cataloging Solutions” that takes over the development and distribution of the application Diamond.

On September 25ᵗʰ, the IFAO/IDEO intern, Mickaël Massey, has arrived at the Scholars’ House for a year-long stay of research.

On October 16ᵗʰ and 17ᵗʰ, 2021, the IDEO is organizing in Cairo its fourth conference entitled “The Cairo Edition of the Qurʾān, 1924”. The conference is under the scientific direction of Mrs. Asma Hilali, and in partnership with the European Union as part of the project Adawāt. Click here to download the program and to join us online …