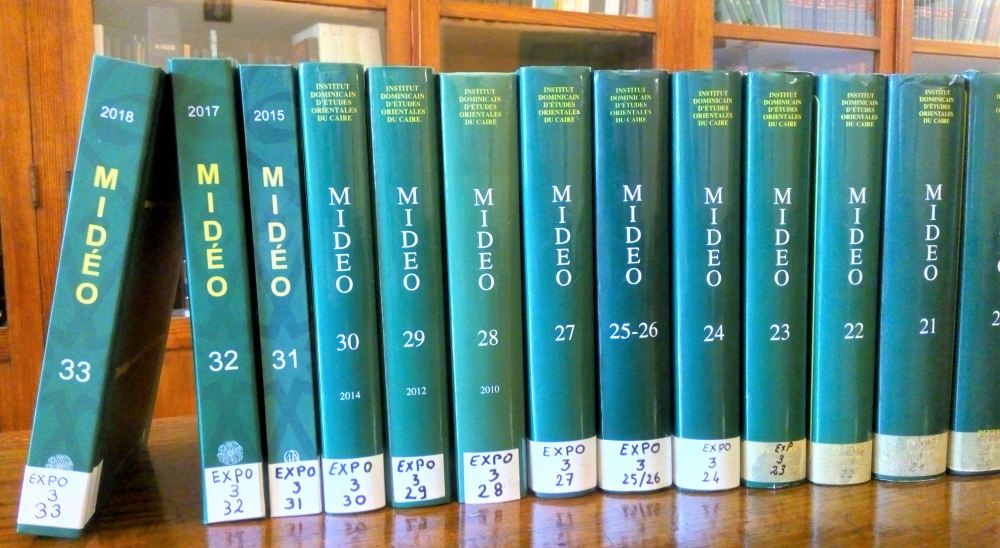 we are glad to announce the publication of volume 33 of MIDEO, dedicated to the Islamic theology of religious diversity. Just as Christianity, Islam must articulate its claim to universality with the reality of a multitude of other religions. What is their status? Are they willed by God? Are they outdated? Are they part of Islam itself? Muslim scholars have been exploring these questions since the early centuries of Islam, and this is the topic of this volume of MIDEO. Starting volume 31 (2015), and thanks to the work of IFAO, MIDEO is fully available online on the OpenEdition website, so you can read this volume 33 by clicking here. In addition, we are pleased to announce that we have made available online the articles of the previous volumes, from 1 (1954) to 30 (2014). In total, more than 220 scientific articles are accessible via the AlKindi catalogue. We hope you enjoy reading them!

On June 7th, Guillaume de Vaulx gave a conference at the Orient Institut of Beirut entitled “Friendship between natural enemies: the ambitious brotherhood of Ikhwān al-Ṣafā”.

From June 19‒22nd, René-Vincent du Grandlaunay, OP participated in the annual conference of the Middle East Library Committee, MELCom International, which was held this year at the Library of the Hungarian Academy of Sciences in Budapest.

On June 18th and 19th, Amir Jajé, OP participated in the international conference “Human rights and conditions for inclusive citizenship in conflict zones” organized in Oslo by HL-senteret Center on the occasion of the 70th anniversary of the Universal Declaration of Human Rights.

From June 26‒28th, Emmanuel Pisani, OP participated in the second international congress of PLURIEL “Islam and belongings” during which he gave a lecture entitled “Al-walāʾ wa-l-barāʾ: issues of a Salafist principle on the perception and the status of the other”, at the Gregorian University in Rome.

On June 25th, René-Vincent du Grandlaunay, OP and Jean Druel, OP were interviewed by the Saudi channel Al-Arabiya as part of a television documentary on the IDEO library.

On June 28th, Jean Druel, OP was interviewed on the work of the IDEO by Mr. Amr Mabrouk on Radio Cairo.

On June 16th, we welcomed for lunch Mr. Amar Ouali, from the military mission of the French Embassy in Cairo.

On June 18th, we welcomed for lunch Mrs. Nora Kalbarczyk, Head of the Middle East Zone for KAAD, the German Catholic University Exchange Service, which offers scholarships to students from the Middle East in Germany. She was accompanied by Fr. Kamil William and Mr. Michel Ghattas, her correspondents in Egypt.

On June 20th, we welcomed for lunch professor Mohamed Serag, Director of the Department of Arabic Studies at the American University in Cairo, and Mrs. Wafya Hamouda, his assistant.

On June 22nd,  we welcomed for lunch Mr. Simon Schäfer, a trainee from the Political Department of the Swiss Embassy in Cairo.