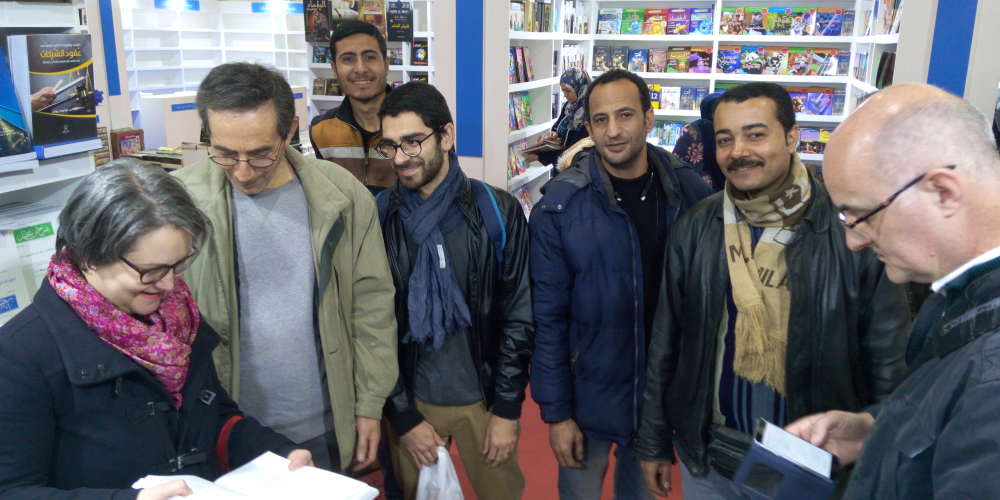 Following numerous rumors in recent months, we feared that the famous Cairo Book Fair would be too remote, too difficult for the public to access, and burdened with discouraging formalities for international publishers. This has not been the case! The organization of this fiftieth Cairo Book Fair is remarkable. Though the premises are certainly a little far from Downtown, access is fast, and the event is modern and functional. Egyptian and international publishers have responded in large numbers to the invitation, and the Egyptian public has been attending, as in previous years. For IDEO, the Cairo Book Fair is the main source of new books from the Arab world. Each year the library team (photo) acquires about 700 new titles (representing about 1,000 volumes, for an amount of about €10,000). The new acquisitions for the library’s classical Arab heritage collection can be seen by clicking here…

On January 17th, Mr. Guillaume de Vaulx led a session of our internal seminar on the topic of “The Islamic Problem of Politics: Reintegrating dīn at dunyā”. From a Hegelian perspective, Guillaume reflects on the Islamic “moment” of human thought, which would correspond with the reintegration of religion into the affairs of the city, after they had been discarded in the name of the Christian principle which wants to “give back to Caesar what is Caesar’s”.

On January 30th, Mr. Aziz Hilal gave the third session of his introductory seminar on Arab philosophy. Click here to see the details of the next dates….

From January 23‒25th, the IDEO organized in Lyon an introductory workshop on Islam for the Dominican student brothers from the Province of France. Those who presented are: Mr. Éric Geoffroy, Mr. Abd al-Haqq Guiderdoni, as well as Rémi Chéno, OP, Jean Druel, OP, and Emmanuel Pisani, OP.

On January 10th, Mr. Guillaume de Vaulx gave a lecture on the topic of “In the Beginning was the Number: The Arithmetical Basis of Philosophy at the Dawn of the Ninth Century”, during the conference “Mathematics and Philosophy in Classical Islam” in Beirut.

On January 17th, Mr. Dominique Avon gave a lecture in Brest entitled “Religious Dimensions of Conflicts in the Near and Middle East”.

On January 22nd, Jean Druel, OP gave a lecture entitled “Christians and Muslims in Egypt: How Religious Identities are (Re)composed Today”, at the Agora-Tête-d’Or in Lyon. This lecture was organized by the Friends of IDEO Association and the Christians of the Mediterranean Network. Click here to listen to the lecture (in French)…

On January 12th, Mr. Dominique Avon participated in a round table discussion with Haoues Seniguer and Jean-Louis Schlegel on the subject of “The Middle East: Religions Held Hostage by Politicians?”

Dennis Halft, OP was granted the 2019 Alexander Böhlig Award for his doctoral dissertation “The Arabic Vulgate in Safavid Persia: Arabic Printing of the Gospels, Catholic Missionaries, and the Rise of Shīʿī Anti-Christian Polemics” (Freie Universität in Berlin, 2016) by the Gertrud-und-Alexander-Böhlig-Stiftung. The award ceremony will be held at the Berlin-Brandenburg Academy of Sciences and Humanities in Berlin on December 13, 2019.

On January 3rd, we received for lunch Mr. Glenn Miles, the new ambassador of Australia in Egypt.

On January 14th, we received for lunch Mrs. Mari Neuvonen, First Counsellor of the Finnish Embassy in Egypt.

In January, we had the pleasure of receiving at the Scholars’ House Mr. Yousef Elzalabany, student at Princeton University in the Department of Near Eastern Studies, Mrs. Catherine Mayeur-Jaouen, member of the IDEO and Professor of the History of Modern and Contemporary Islam at the University of Paris-Sorbonne, Ms. Hadel Jarada, a researcher in Islamic intellectual history, Mr. Lutz Rogler, researcher in political Islam, Ms. Nadirah Mansour, PhD student at Princeton University, and Mr. Alain Messaoudi, Professor at the University of Nantes.