After a short foray into the Jain logic and its model for the status of enunciation in a debate, Rémi Chéno pursues his research on the possibility of a pluralistic approach to religions. 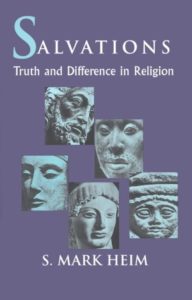 In his famous book, The Nature of Doctrine, 1984, George Lindbeck opposed the cultural-linguistic model, now called post-liberal model, to the propositional cognitive model of classical metaphysics, and to the expressive experiential model of liberal theology. On preliminary examination, these three models refer respectively to three different theories of truth: the pragmatic theory, the realist theory of correspondence and the idealistic theory of coherence. But these associations operate only approximately. END_OF_DOCUMENT_TOKEN_TO_BE_REPLACED

Islam presents itself as an all embracing system claiming total and extensive comprehension of the world. Prophecy fulfils the originating law within it, the creative divine decree whose knowledge constitutes a return to the first, hidden meaning which is always anterior and always already given. Christianity, in a contrary sense, awaits for an accomplishment of everything human in Christ, the new Adam who recapitulates creation. The work of the Spirit relates back to an eschatological “excess” or “surplus” always to come and not yet given except in outline, in Christ.

You may buy this paper online.

Contemporary Catholic ecclesiology has progressively centered itself on a few very precise technical expressions in the corpus of documents of the 2nd Vatican Council, the ecumenical implications of which were certainly important. However the discussions which they engendered have somewhat lost steam. An analysis of recent Catholic works on ecclesiology points to new areas of investigation which will have to face up to the difficult question of the unity of the complex reality which is the Church, as Lumen gentium, n. 8 says.

You can read its full text.

Rémi Chéno is French and lives in France.

Born in 1959, he is a Dominican priest. He has been a student chaplain at the French “Grandes écoles”. He has a PhD in theology from the University of Strasbourg, and has been teaching dogmatic theology in the Faculty of theology at the Catholic University of the West (Angers, France) and was a member of the research team EA 4377 (Catholic theology and religious sciences). He was also the head of the PhD studies in this faculty.

Rémi Chéno is specialized in ecclesiology, and lated devoted his research to pneumatology and eschatology. His works now focus more on (Christian) theology of religions.

He was general secretary for IDEO between October 2014 and December 2020.