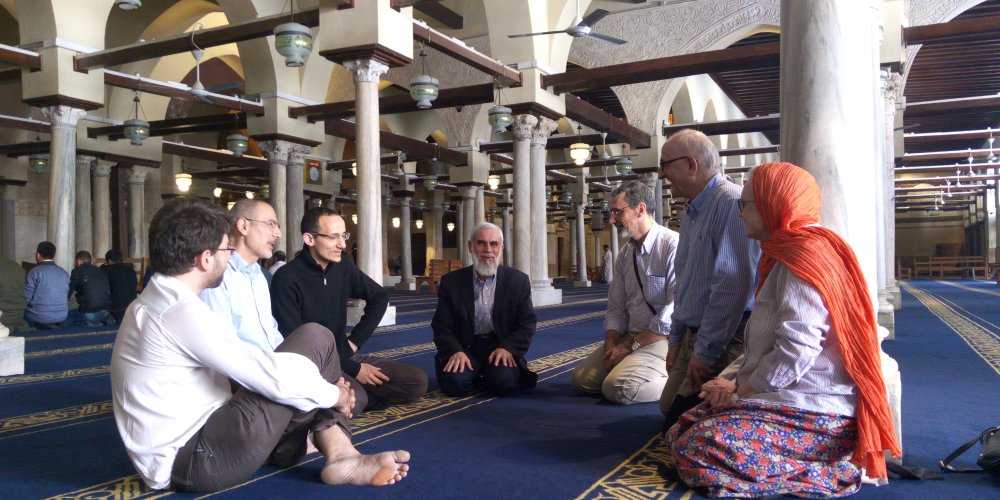 The visit of the Islamic-Christian group for theological reflection, organized by the SNRM (National Service of the Bishops of France for Relations with Muslims), was a beautiful occasion of exchange and reflection (photo). The members of this group are as follows:

The intellectual and academic tradition of Muslim theology often struggles to make its voice heard and is often neglected by proselytizing discourse. The work of this group is therefore extremely encouraging!

On November 13th, Mr. Oussama al-Saadouni Gamil, PhD student at the Faculty of Dār al-ʿUlūm, presented his thesis work on inflation in the Mamluk Era. He chose to focus on a ten-year period, from 800/1397 to 810/1408, in order to study, in as much detail as possible, the factors at play. Click here to read the report…

From November 29 to December 1st, we received the Islamic-Christian theological reflection group organized by the SNRM, (National Service of the Bishops of France for Relations with Muslims). On November 30th, as part of the French Insitute’s “Midan Mounira” lecture series, Adrien Candiard, OP led a round-table discussion between Djamel Djazouli, Denis Gril, and Omero Marongiu-Perria. The debate focused on Muslim perspectives on interreligious dialogue. Click here to read the report…

From November 5-8th, Amir Jajé, OP participated in an international conference entitled “Muslim-Christian Dialogue for Better Understanding”, organized by the Royal Jordanian Institute for Interreligious Studies and the Forum for Development, Culturem, and Dialogue (FDCD) in Amman.

From November 7-8th, Adrien Candiard, OP gave two lectures on Islam, one at the parish of Saint-François-de-Molitor in Paris, and the second at the Dominican Priory in Rennes.

On November 9th, Emmanuel Pisani, OP, along with Mohamed Khenissi, gave a lecture entitled “The Question of Apostasy in the Muslim Legal Tradition” during a study day organized by ISTR in Paris.

On November 11th, Jean Druel, OP gave a lecture at the French Institute as part of the “Midan Mounira” lecture series entitled “The Arabic Language: This Beautiful Unknown” in which he presented the state of research on the origin of the Arabic alphabet, and the historical sources for the study of written and oral variations of Arabic.

On November 15th, Dominique Avon gave a lecture entitled “The Magisterium of al-Azhar by the turn of the 20th and 21st centuries”, at the Catholic University of Lyon. Click here to listen to the lecture in French…

On November 16th, Mateus Domingues da Silva, OP participated in the conference entitled “Rationality and Mystical Tradition: Shiite and Catholic Perspectives”, organized at the Pontifical University of Saint Thomas (Angelicum) in Rome. He gave a lecture entitled “The Human Knowledge of God According to the Metaphysics of Light of Suhrawardī”.

On November 17th, Jean Jacques Pérennès, OP participated in a conference/debate with Jacques Huntzinger in Paris on the topic of “Religiosity and Secularization: Contradictory Trends”, organized by the iRemmo (Institute for Research and Studies on the Mediterranean and the Middle East).

On November 17th, Emmanuel Pisani, OP, along with Ghaleb Bencheikh, gave a lecture entitled “Prayer in Religious Traditions: A Challenge for Interreligious Dialogue”, at the Interreligious Forum organized during the Weeks for Islamic-Christian Encounter in Strasbourg.

On November 21st, Claudio Monge, OP gave an opening lecture at the Dies Academicus 2018‒2019 of the theological faculties of Veneto and on November 22nd, he gave a lecture in dialogue with Cristoph Theobald, SJ in Padua.

On November 22nd, Emmanuel Pisani, OP led a conference/debate on the subject “The Questions that Muslims Ask Us”, at Saint-Jean-Baptiste parish in Rouen.

On November 22nd, Emmanuel Pisani, led a conference/debate entitled “Why dialogue?” at the Lycée of Sacré-Cœur in Rouen.

On November 26th, Emmanuel Pisani, OP led a conference/debate entitled “Rational Islam or the Islam of the Enlightenment, Yesterday and Today: Is There a Renewal of Muʿtazilism?”, at the Fabrique du 222.

On November 23rd, Dominique Avon participated in a round table in Paris on human rights during a study day entitled “History and posterity of the Universal Declaration of Human Rights”.

On November 24th, Emmanuel Pisani, OP, Rabbi Gabriel Haggaï, and researcher Karim Ifrak led a round-table discussion on the topic of “Religions and Citizenship”, as part of an evening organized by Méo High School in Villeneuve-Saint-Georges.

The call for papers for MIDEO 36 (2021), dedicated to iǧtihād and taqlīd, was published by Emmanuel Pisani, OP. The deadline for submitting articles for evaluation is January 15th, 2020. Click here for more information…

On November 1st, Jean Druel, OP was interviewed by TV program “Layālī,”  on the Nile Culture Channel, on the history of IDEO. Click here to watch the program (in Arabic) …

On November 8th, Jean Druel, OP was given a 5-year appointment as an expert by AVEPRO, the Vatican agency responsible for the evaluation of Catholic universities.

On November 5th, we welcomed for lunch Mr. François Legué, First Counsellor of the French Embassy in Cairo.

On November 9th, we welcomed for lunch M. Jakub Sypiańsky, PhD student at Johannes-Gutenberg University in Mainz, Germany, who works on the social context of intellectual exchanges between Byzantine and Muslim countries (750‒969).

On November 19th, we welcomed for lunch Mrs. Melanie Franzen, Political Counsellor at the German Embassy in Cairo.

On November 27th, we received for lunch Mr. Ibrahim Mansour, PhD student at the University of California, Santa Barbara and ARCE fellow in Cairo, who works on the origins of the Shadhiliyya Sufi brotherhood.