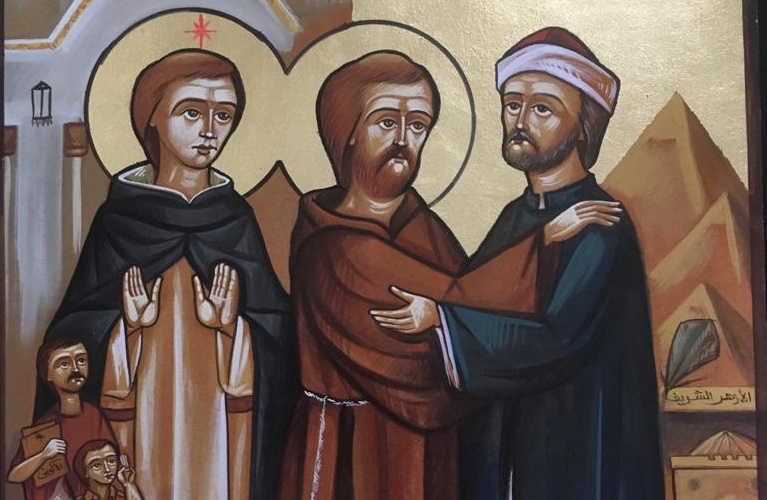 The price of bread has soared from the bowels of the Nile Valley. Then the thud of the cannon sounded and an atmosphere of serenity enveloped everything during this month of Ramadan. With ongoing lectures and seminars, we lived to the rhythm of ifṭār-s and prayers. And yet, blood also flowed in Egypt when a Coptic priest in Alexandria had his throat cut after giving his Lent alms to his attacker. Was he insane? Was he a terrorist? Definitely a lost one. Then resounds the happy and consoling prayer of everyday life, the one that joins the rhymes of the psalmist, when from the top of the minaret or in intimate spaces, Muslims implore to remain on the straight path of salvation and life. To avoid the ambush of the bitter and painful traps to which we are sent back, we should rather refine our hearts with the voice of the muezzin, that ink way that announces the word.

From April 5ᵗʰ to 7ᵗʰ, Ms. Anne-Sylvie Boisliveau participated in the international conference “Esotericism and the Qurʾān”, organized by the Universities of Geneva and Lausanne. She gave a lecture entitled “Is the Qurʾān an esoteric text?”.

On April 10ᵗʰ, Ms. Catherine Mayeur-Jaouen gave a lecture on the topic of “Pilgrimages in Islam: the example of Egyptian Islam”, as part of the “Midan Mounira” lectures series.

On April 11ᵗʰ, Ms. Catherine Mayeur-Jaouen led a seminar entitled “The Cult of Muslim saints: methodological issues and historiographical debates” for students of the Faculty of Languages and Translation at al-Azhar University, as part of the project Adawāt.

On April 28ᵗʰ, Adrien Candiard, OP gave a lecture for the Friends of the IDEO on the topic of “Is Islamic theology useful for anything? Watch the lecture on YouTube (in French)…

On April 10ᵗʰ, we welcomed Ms. Pilar Villanueva, Minister-Counselor of the Spanish Embassy, and Mr. Álvaro Travesedo, the Spanish Consul in Egypt.

On April 14ᵗʰ, we welcomed Mr. Mourad Wahba, the new president of the Society for Coptic Archaeology, and Mr. Nabil Farouk, the director.

On April 20ᵗʰ, we welcomed Mr. Adrien Cluzet, in charge of the project “Debate of ideas and books” at the French Institute.

On April 26ᵗʰ, we welcomed Ms. Fatiha Bouzidi, graphic designer, as well as Mr. Alaa al-Habashi, Islamic heritage architect, and his wife Ms. Ola Salah Saïd, both owners of Bayt Yakan in al-Darb al-Ahmar, the site of the NGO Center for Revitalization of the City which organizes events and workshops focusing on heritage, art and culture.

On April 27ᵗʰ, we welcomed Ms. Camille Thiébaut, political advisor of the French Embassy, in charge of religious affairs.

On May 12ᵗʰ, Emmanuel Pisani, OP will give a lecture entitled “No salvation outside Islam? Jews, Christians and heterodox in the thought of Abū Ḥāmid al-Ġazālī”. The lecture will take place at the cultural center Les Dominicains de Lille (France) at 8:30 pm.