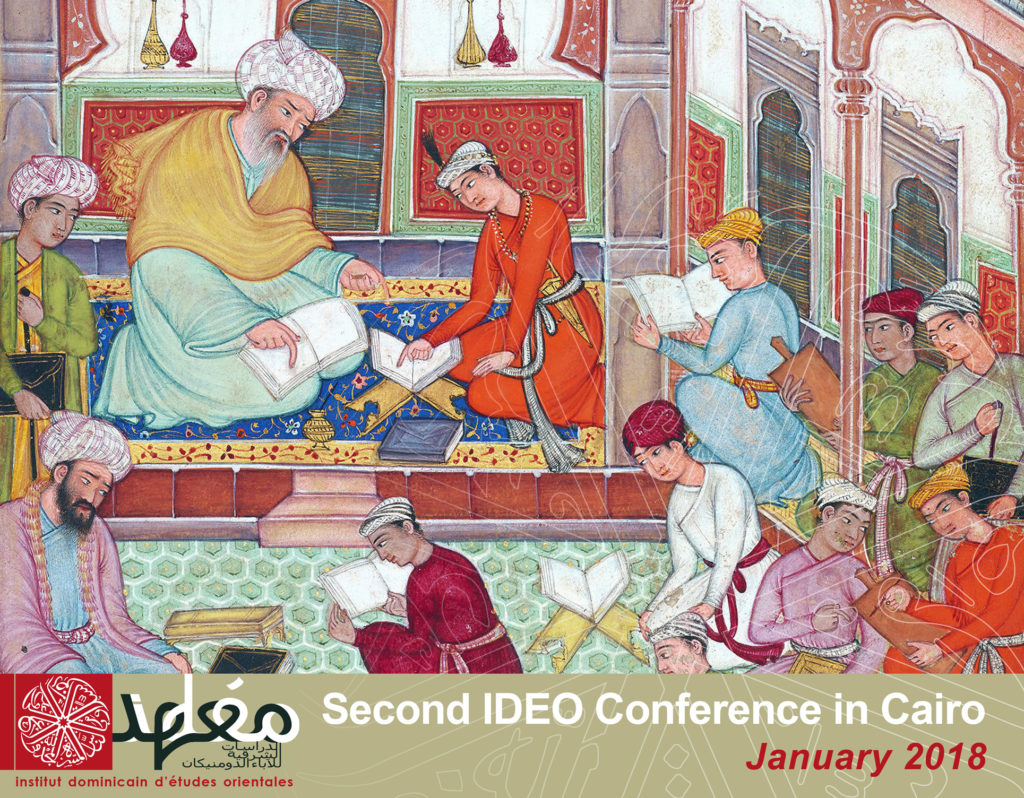 In collaboration with the French Institute of Egypt

One of the questions raised today by some Egyptian religious authorities is on the lawfulness and relevance of using intellectual tools foreign to the Islamic tradition to read and interpret the Qurʾān and texts of the classic Islamic heritage. Is it permissible and appropriate to use contemporary human sciences to study the texts of the Arab-Islamic patrimony or should it be limited to Ḥadīṯ? IDEO would like to contribute to this debate by studying the emergence of Ḥadīṯ as the authority of knowledge in the Islamic sciences between the 4ᵗʰ/10ᵗʰ and the 8ᵗʰ/14ᵗʰ century.

As demonstrated by Jonathan Brown (2007), the process of canonization of the body of Ḥadīṯ in the 4th/10th century primarily answered the new needs of the Islamic community. And as noted by Aisha Musa (2008: 17–29), this canonization did not occur without the protest of those who saw Ḥadīṯ as a rival to the Qurʾānic text. In its two constitutive parts, matn and isnād, Ḥadīṯ enables scholars to transmit juridical, theological and spiritual knowledge as well as to connect this knowledge to the authority of the Prophet (Brown 2010: 166‒168). Since the 2nd/8th century, Muslim scholars have been confronted with the following paradox: how does one interpret a source that is certain (the Qurʾān) through the lens of texts whose historical reliability is doubtful and subject to criticism (Ḥadīṯ)? Isn’t human reason more reliable than Ḥadīṯ? The middle way of Ašʿarism (between a strict theological literalism and Muʿtazilī rationalism) enabled a kind of fusion between the science of Ḥadīṯ and the rational Muʿtazilī tools (Brown 2010: 178). However, Ašʿarism never silenced more traditionalist voices for whom Ḥadīṯ was the ultimate source of knowledge.

Many scholars have studied the mutual influence of Ḥadīṯ on Fiqh, exegesis, theology and Sufism. We would like to further this research by studying other fields of knowledge in which the recourse to Ḥadīṯ has also been increasing since the 4th/10th century, such as grammar, philosophy, medicine… Are all sciences influenced by this movement? And even in the religious sciences (Fiqh, exegesis, Kalām, Sufism, etc.), do authors turn to the Ḥadīṯ in the same way? Practically, do they treat the ḥadīts, which go back to the Prophet, differently from those which go back to God, as is the case with the aḥādīṯ qudsiyya, and from the āṯār, which trace back to the Companions? Are both matn and isnād used in the discussions? Are ḥadīṯs merely used as an identity marker? As an illustration? As a means to confer Prophetic authority to knowledge? Why would weak ḥadīṯs still be used? Is there resistance to this movement? How would Shia authors deal with Ḥadīṯ? How and to what extent did the Ḥadīṯ also become a source of authority in fields where one would least expect?

In a more fundamental way, and beyond the functions of Ḥadīṯ in Islamic sciences, what is the epistemology that justifies or necessitates recourse to Ḥadīṯ? Is the same ‘radical hermeneutics’ described by Walid Saleh (2010) to be found in all authors? Why must the origin of human knowledge be based in the Prophet’s sayings? Can human reason have access to certain truths without the help of a prophetic revelation?

The proceedings of this conference will be published in MIDEO, the journal of the Institute, issue 34 (May 2019) – contingent on the approval of the reading committee.

The conferences of IDEO aim at supporting young scholars (PhD students and post-PhDs) by providing a space for encounter and debate. To attend the conference, please register by email at the following address: . Registration and attendance is free of charge. The deadline to register for attendance is December 31, 2017.

If you wish to submit a proposal, please send an abstract of 300 to 500 words in English, French or Arabic, as well as your CV to the same address, . The deadline for submitting a proposal is September 30, 2017. We will select between six and ten proposals.

Brown, Jonathan A. C. 2007. The Canonization of al-Bukhārī and Muslim. Leiden‒Boston: Brill.

—. 2011. “The canonization of Ibn Mâjah: Authenticity vs. Utility in the formation of the Sunni Ḥadîth canon,” in Revue des mondes musulmans et de la Méditerranée 129: 169–181.